So the John-Paul Jones Group as you know starts playing May and ends October of each year.  H&J Entertainment is currently booking and planning performances on behalf of the John-Paul Jones Group for 2020 if you would like to be considered as a potential event or sponsor, contact us 515-207-2611. We have been a little remiss in updating on a show by show basis, but its been such a busy roller coaster. We have enough footage for 8 DVD releases in 2020. We will be going through the hours of footage to determine what will be used for a 2020 DVD release.

Jp starts writing and pre-production recording sessions in December. The band will record a new EP for a 2020 Release during the months of January, February, March and will plan on a May Release of a new double EP of original material and selected tribute selections.


The 2019 Concert Series marked the 20th year of the John-Paul Jones Group.  And Jp says its been the best year yet.

2019 saw some great things happening.
HERE IS A RECAP OF THE SUMMER IF YOU MISSED IT BE SURE TO GET ON THE MAILING LIST. http://www.johnpauljonesgroup.com and you will be kept up to date. Also following the John-Paul Jones Group on Social Media will keep you up to date.

On May 18th the band opened up its annual concert series with a blitering 90 minute concert at the HFI Creativity Lab a unique venue in Fairfield, Iowa operated by Dr. Eric Schafer.  The room was full of dancers and they let Jp know that he is correct when he says, "An artist first obligation is to his true musical integrity and the rest will follow."


The band took a break through the Month of June while Jp designed and build the "Maiden Voyage" his proprietary mobile stage system..

July 4th saw them back with a vengence at the 9th Annual Bourbon & Blues Festival in Swisher Iowa.  The band performed to a packed house and really stretched their wings...The band typically plays a 90 minute set maximum and has done so for years.  But upon the request of the organizers of the Bourbon & Blues Festival Organizers extended its set to 150 minutes and went over wonderfully.

On July 20th H&J Entertainment, Lexington Properties and the Rhodes Family joined forces and put on the 1st that we hope is many Blues-Bikes-Cars (Wapello Edition) which raised money for the worth Cause of partially funding the Wapello County Sheriff's Reserve Childrens Shopping Program.


August 10th Muscatine Woodstock Festival presented  the John-Paul Jones Group as a featured artist.  The band played a sweltering set and shared the stage with other regional acts paying homage to music of the Woodstock Generation.


August 13th for a 2nd returning year the Iowa State Fair featured the John-Paul Jones Group in the Susan Knapp Amphitheater.  The band again played an energetic set that was recorded on video and audio which will be released in 2020.  Jp was interviewes by the ISFWWC Media Group's publisher Kim west after the show.


August 24th continuing their tradition of charitable awareness and giving H&J Entertainment, presented the John-Paul Jones Group in a Patriot's Picnic. That rose awareness for the Ottumwa Veterans of Foreign Wars Post 775.  This concert was recorded look for it to be released in 2020.  Also look for this to become a concert series unto itself in 2020, as Jp wants to expand the charitable giving for this series.


September 13th saw the John-Paul Jones Group's Debut at the SLRA End of Summer Rally.  Jp, Jesse and Steven brought the Heavy Blues to Van Buren County.  They went over wonderfully and are communicating with the organizers to come back for an afternoon set next year with the Maiden Voyage. 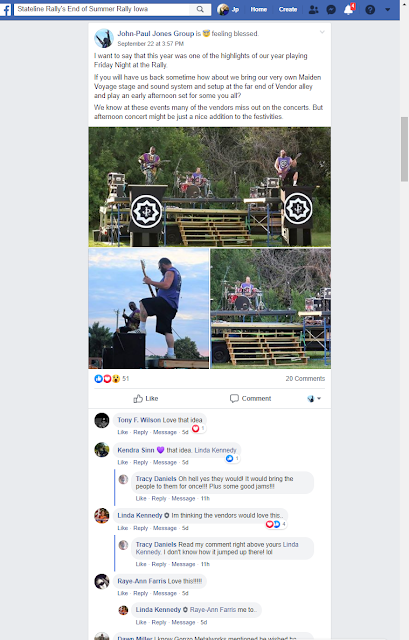 September 21st saw the return of the John-Paul Jones Group to the Jessica Peine Memorial Ride and Benefit Festival. The band was in their quickly becoming a running theme of extreme musicianship and over the top showmanship.  Their song selection has a little something for everyone of all ages and musical tastes, but still all songs fall within the Heavy Blues Genre.

September also saw the release of Lifoti Magazine featuring an article on page 8 of the John-Paul Jones Group. Lifoti Magazine is an international music and culture magazine featuring contemporary artists of all genres Jp was interviewed for the magazine earlier in the summer.  Its great to see such a relevant publication choose this artist as a part of its editorials.


A LINK TO THE EXPANDED ARTICLE ONLINE -
http://www.lifoti.com/2019/09/the-rebirth-of-heavy-blues-is-in.html


October 26th is the John-Paul Jones Group's last performance of 2019.  The band's management is currently in negotiations with festival organizers, sponsors and concert hosts for 2020.


We must thank all of our concert series sponsors. To name a few... Lexington Properties, Iowa State Fair Association. HyVee, Donner Deal, Galaxy Audio, and many others please visit the website to see the exhaustive list of sponsors and supporters of the John-Paul Jones Group.

Remember if you want to have the best value in entertainment, then contact H&J Entertainment, 515-207-2611 and see if you can put on the John-Paul Jones Group Selective schedule.

Posted by John-Paul Jones Group Moderator at 6:50 PM No comments:

UPDATE: Summer is Almost Over... Catch us before we go into hibernation


SEPTEMBER 6th, 2019: We will have some regular posts and reviews on the past shows.  We have been very busy this summer.

So this summer the John-Paul Jones Group has been very busy.


H&J Entertainment, LLC and the crew have recorded HOURS of video this summer and Jp will be going into the studio with the crew to edit and master all of that footage.
Look for multiple DVD/Video Albums to be released in the upcoming months.

Also we are looking at different shirt offerings this year.   Let us  know your favorite style shirt in the comments and we will look into having them offered at the shows.  As always we have multiple style shirts on the http://www.johnpauljonesgroup.com

To the right is an interview with Kim West of the ISFWWC Group, this media group covers every day of the fair you will see a picture below of Kim's Facebook post.


Also REMEMBER we need your support,  you can support in one or more different ways.


We TRULY APPRECIATE any way you can support the John-Paul Jones Group.  It doesn't have to be money, find us at a free show.   Simply like and share our videos, music and social media.  We cannot do this without our great sponsors, and our sponsors want to see that YOU the AUDIENCE are out there supporting us.

Here are a few photos to enjoy from the recent summer shows.  More details to come. in later articles.  Look for more content in the upcoming months after the playing season is over.


AGAIN WE CANNOT THANK YOU THE AUDIENCE AND SUBSCRIBERS ENOUGH.

ENJOY THE REST OF THE GOOD WEATHER.

The band goes into the studio from November 2019  thru April 2020.  Then will be back out on the road starting Memorial Day weekend 2020.   Keep up to date on the progress at those links above on the upcoming releases,  there are quite a few scheduled for the upcoming season. 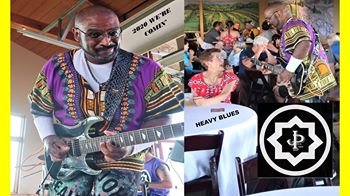 Posted by John-Paul Jones Group Moderator at 10:11 AM No comments:

On July 20th, 2019, despite a statewide heat advisory and power fluctuation problems the John-Paul Jones Group performed at the 1st Annual Blues-Bikes-Cars Concert in Ottumwa, Iowa.  Their brand of Heavy Blues must of  brought in the Heavy Weather, but the band played right to the eve of the storm.

The crew worked hard during the storm to pull down the gear and get it out of the storm we were all soaking wet and cold and thanks to a couple good Samaritans we were able to get most of the gear protected.

The cars were great as well here are few pictures of them.

The Vehicle Show was wonderful with 45 entries.  1st -3rd place was given for cars and trucks. We will get the full roster and awards up in the next few days.  We wanted to thank Scott Reeves of Reeves Hauling for the donation of the Trophies.

We want to give special thanks to Michael & Brittney Rhodes for managing the car show.  Brittney and Jp worked very close together to get things going, and for their first event they got it organized very well. Michael and his crew organized the parking and everything went together well despite it being record hot weather.

The band played great, the new stage show was awesome.  Walnut Hill took a bunch of great photos and we will put them up right here below: 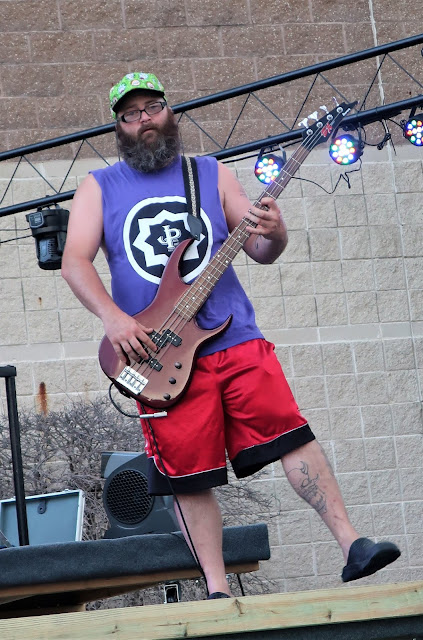 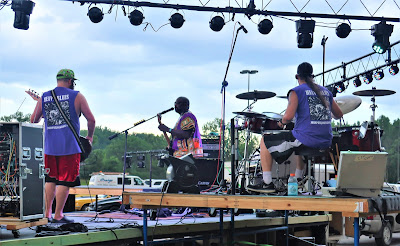 Shot fromt he Back of the Stage 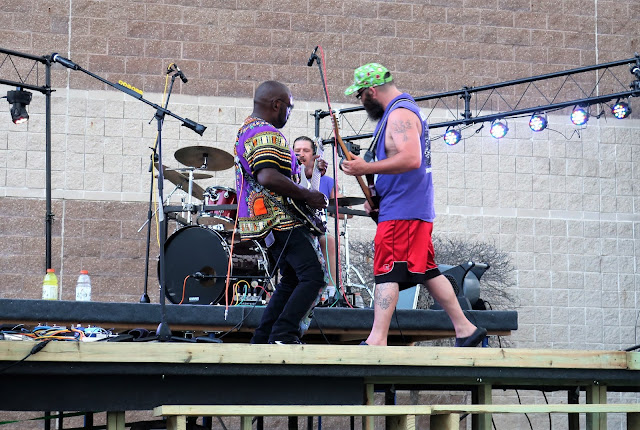 The Three Amigos Doing What they Do 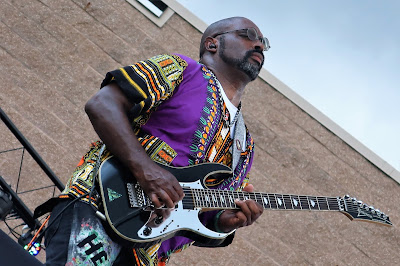 Jp all in the moment 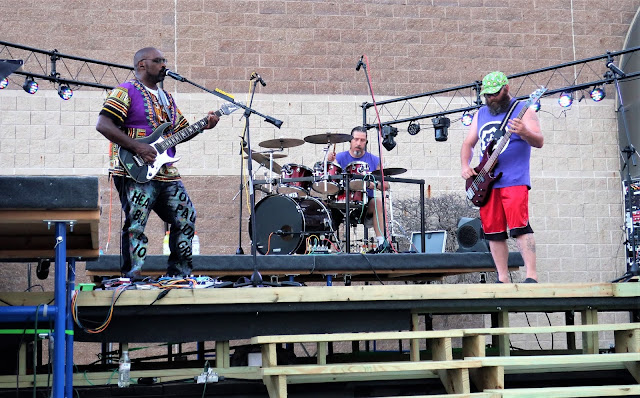 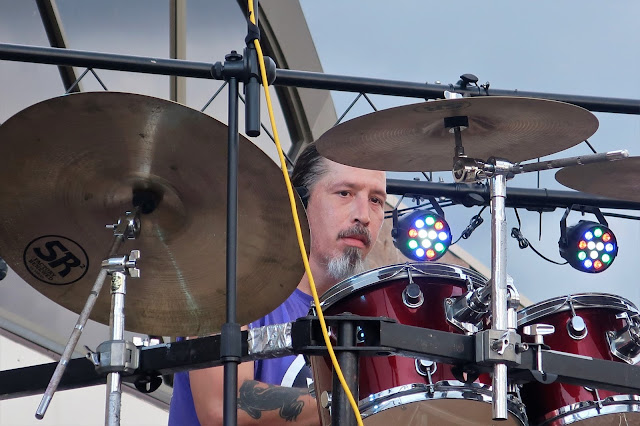 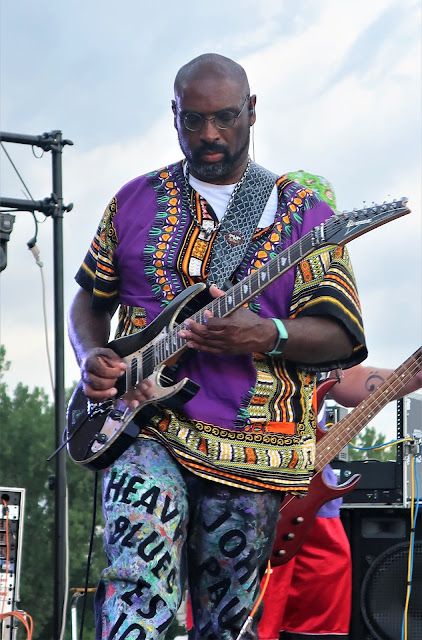 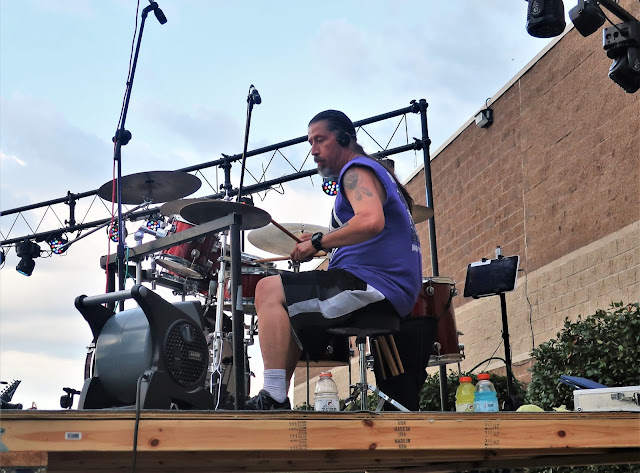 Another great shot of the Amazing Drummer Steven Jones 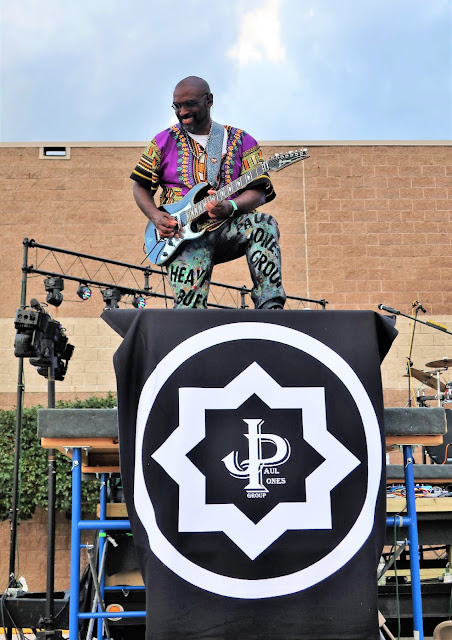 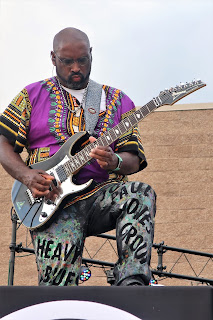 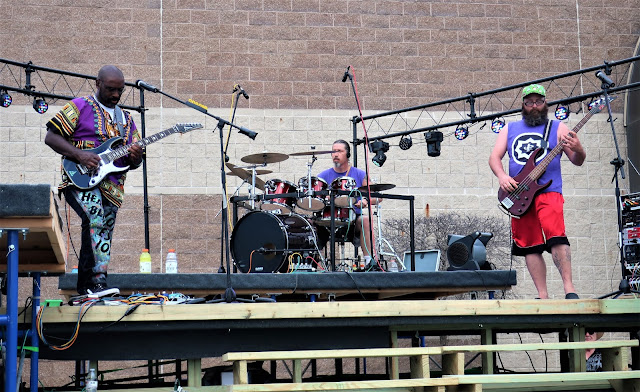 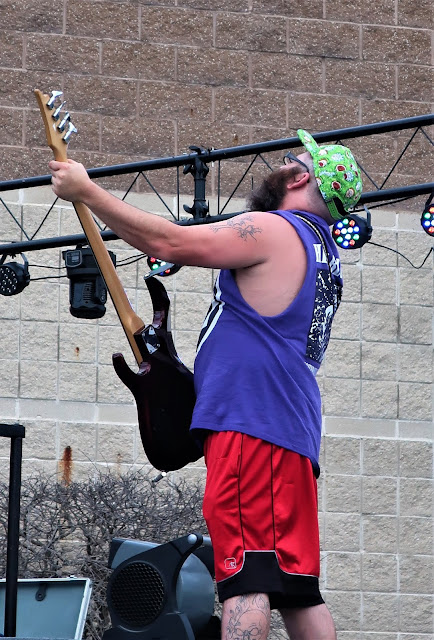 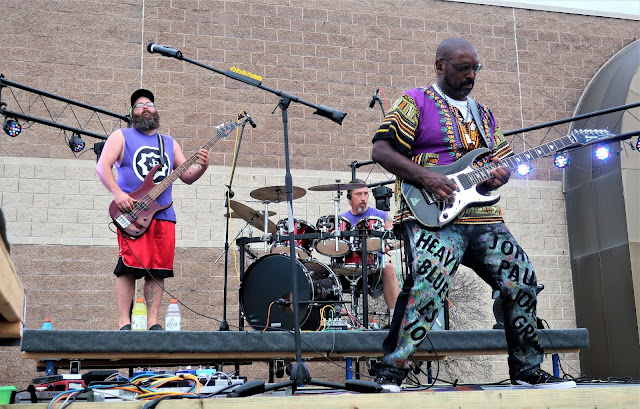 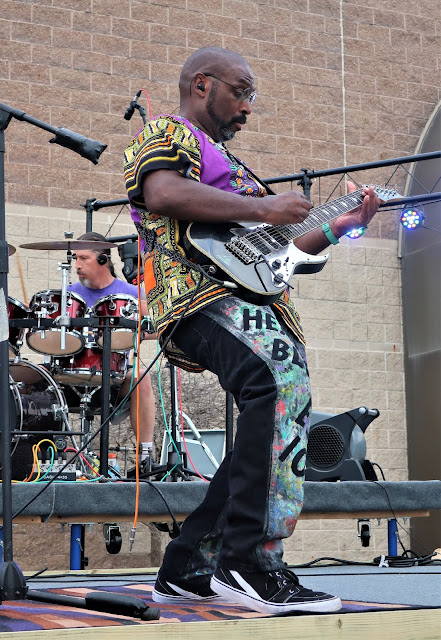 Where's you get them kicks 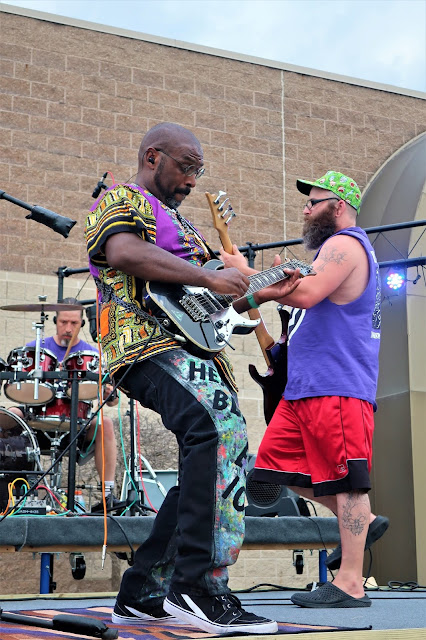 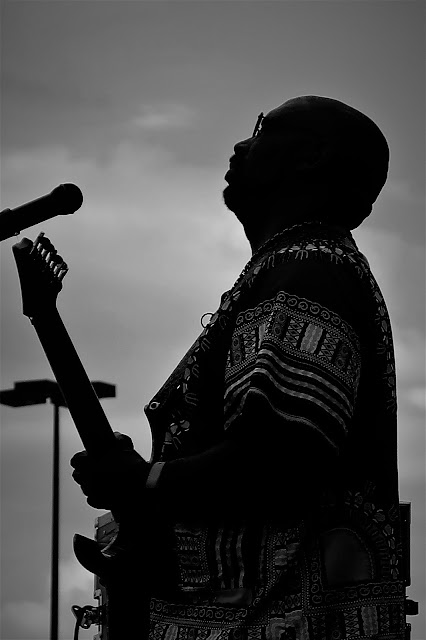 Looks like the sky was crying today, could it of been Jp's brothers (RIP) crying tears of joy from above for him and what he was able to put together. We know they are proud of him and his determination as we all are! 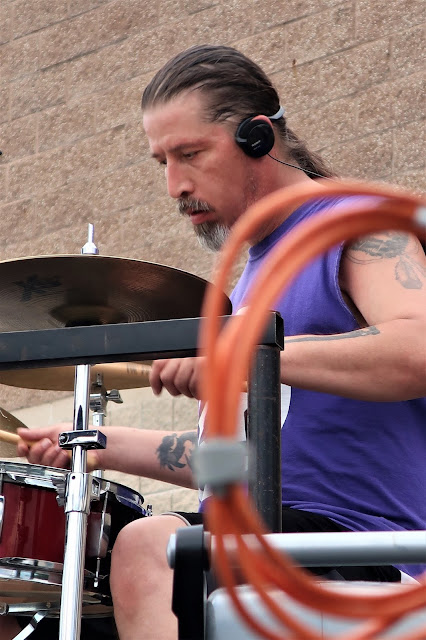 The look of serious contemplation. 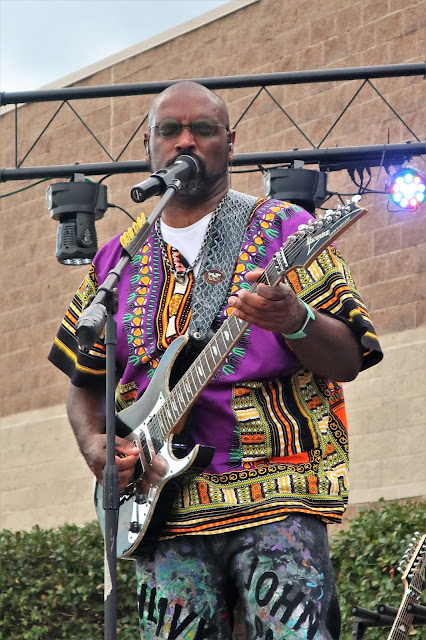 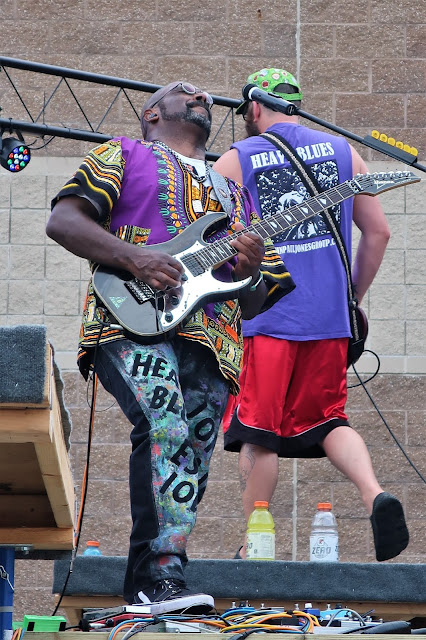 The shirt and the pants say it all "Heavy Blues" baby

THIS is the presentation of the John-Paul Jones Group.
You want to hire a professional looking and sounding act for your next event?
Then this photograph shows you what you can get.
Iowa's only Self-Contained professional entertainent company. 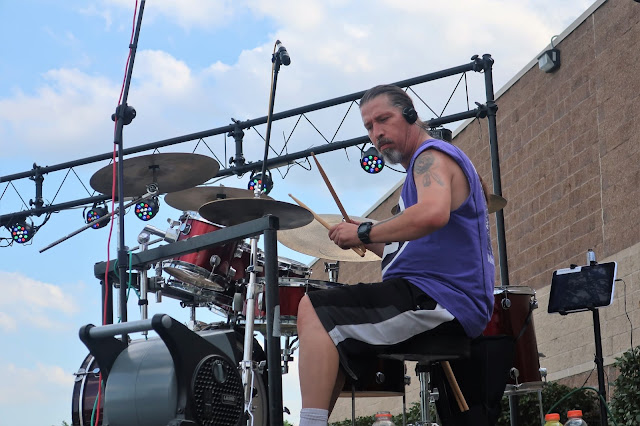 Steven Jones is a consumate professional drummer.  He knows how to bring the heavy to the blues. 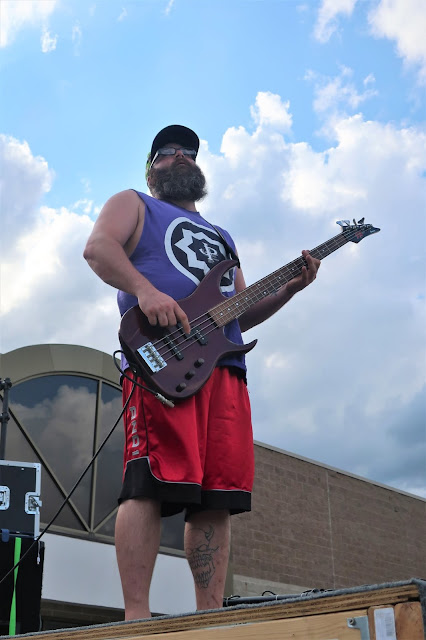 Always the Low-End Master, but man look at those LEGS they make all the money. 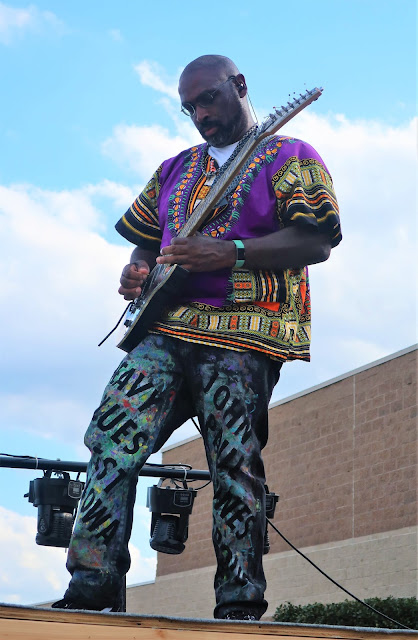 The fearless leader of the John-Paul Jones Group 20 years past now and the next 20 years ahead.

I would like to thank everyone who contributed to this event.

Last but not least, Jp has dedicated his entire effort in memory of  Brian Reck, and the way Jp played it was like a man on fire, he made the guitar sing to his brother.  We know that Brian was in the skybox alongside, Shawn Jones , John-Paul Sr. and Randy Kapple looking down at him, the sky just could not contain their tears of joy.

Brian Keith Reck, my Brother and friend.
"If I don't see you no more in this world, I will see you in the next one, and don't be late"
You will be missed, but Gunner will be loved - Jp

Posted by John-Paul Jones Group Moderator at 9:41 AM 1 comment: 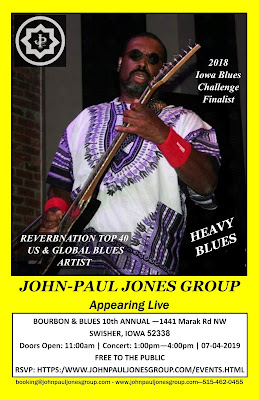 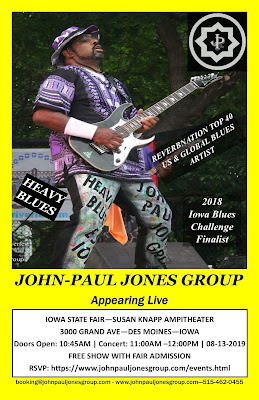 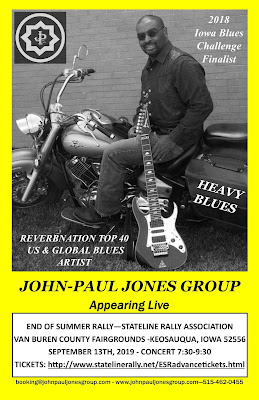 September 13th, 2019 The John-Paul Jones Group will be performing at the End Of Summer Motorcycle Rally in Keosauqua Iowa.
TIME: 7:30 - 9:30PM 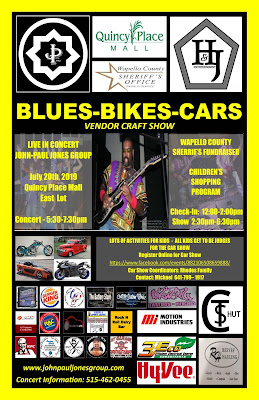 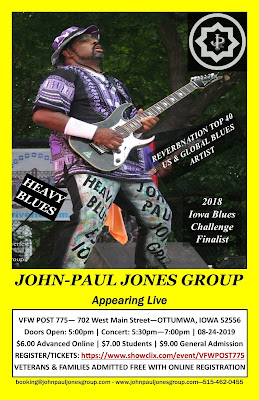 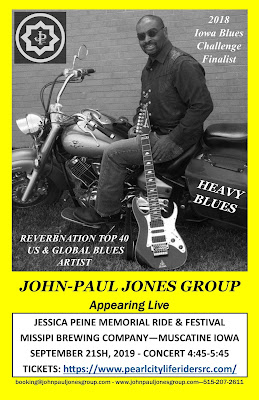 There are several other shows in the works for the late summer fall.  BAND IS OFF FOR THE MONTH OF JUNE.
The band will be done playing for the year in November through May 1st.
So if you would like to see them next year send us information on your interest.
IF YOU CANNOT MAKE A SHOW GO TO OUR WEBSITE AND PURCHASE SOME MERCH YOUR SUPPORT IS GREATLY APPRECIATED.
LADIES WE HAVE FITTED WOMEN'S T-SHIRTS, BAGS, COFFEE CUPS  please check out the website http://www.johnpauljonesgroup.com/store.html
BIG GUYS - we carry shirts int 3X 4X and 5X  Check out the store as well.
Heavy Blues Forever!!!

Posted by John-Paul Jones Group Moderator at 9:58 AM No comments: